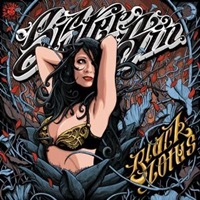 Sticking out amongst a label roster more known for its hardcore, death metal, or metalcore, Sweden’s Sister Sin prefer the tried and true heavy metal meets dirty 80’s hard rock veneer to hang their hat on. Previous albums gaining decent acclaim like Now and Forever and True Sounds of the Underground led to prime tour opportunities here and in Europe with Motörhead, Arch Enemy, U.D.O., and Lordi. The fifth platter Black Lotus dishes out another 9 cuts of primal, street-level metal – keeping the hooks engaging and instant while carrying on a lot of the spirit of the 1980’s scene when bands like W.A.S.P., Accept, and Warlock made inroads.

Many have spoken about Liv Jagrell and her spunky, bleed for the cause singing register, and it is a distinct element in their favorable appeal. If pinned down to think about comparisons when checking out the swanky anthem “Count Me Out” or guitar harmony fueled “Chaos Royale”, imagine if you will a female version of Blackie Lawless meets Lemmy Kilmister – thrown through an angry glam/punk makeover. Then you take note of highway cruising guitar parts sitting against in the pocket bass/drum work that made Accept and Judas Priest legendary, and you’ll understand why “Desert Queen” plus call and response oriented “Sail North” (complete with Sunset Strip axe slides and guitarist Jimmy Hiltula trading off verses vocally with Liv in a Vince Neil-oriented sneer) should have no problem maintaining Sister Sin set list staple status.

Even when the band decide to throw a left field, low key/semi-acoustic oriented number such as “The Jinx”, the dramatic keyboards and subtle background orchestration make this a winner in a way that “Dream On” or “Home Sweet Home” did for earlier generations in the hard rock charts. The military drum hits from Dave Sundberg on “Food for Worms” segue into an addictive, power charge number that grabs the jugular and tickles that aural nerve to never let go in the brain or body. Tidy at 37 minutes, Black Lotus proves Sister Sin will not relinquish their ability to be gritty, focused, and passionate about their heavy metal – and we the audience benefit from this in the long run.