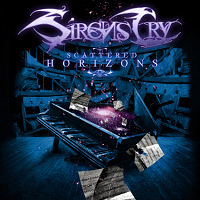 Plopping a female down within the realms of epic/progressive metal isn’t such a far-reaching concept these days; half the dudes singing this style are slightly effeminate anyway, ya know? Austria’s Siren’s Cry have a gal by the name of Katina Bilak out front, thus satisfying that particular pocket of tenderness that usually happens when a not-so-needed ballad comes into play, but here on Scattered Horizons, she’s going to work with progressive metal that begs of Divine Wings of Tragedy-era Symphony X. So just imagine a Russell Allen-female vocalist switcheroo…

Being that a lot of the ideas on Scattered Horizons are central to Symphony X pre-The Odyssey (save for the keyboard doodle on “Elegy of R’lyeh” – total Dream Theater), Siren’s Cry never quite imposes their own will on these songs. Bilak, even, is slightly androgynous at certain points – you could see certain ball-pinched Euro wailers making a play on cuts like “S3V3N” and “Oratory & Sins.” But, the real Romeo (Michael, that is) worship comes via the vocal chant/quick keyboard sequence on “Draconian Spectrum,” and the quickened guitar shred sequence that kicks off “Serpents of War.” Sub-Symphony X at its finest…or worst.

Hard to figure out what Siren’s Cry has been doing in the 14 years since their formation to produce only one album that drifts way too close to Symphony X. You’d think their musical vocabulary would demonstrate a little more expansion than this, but in earnest, sometimes the best way to get one’s foot in the door is by emulating a band that is universally liked.