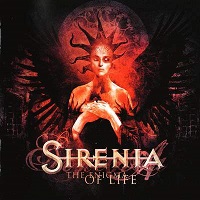 More poppy (and fluffy) than ever, Sirenia return with another quality display of female-fronted Goth metal with The Enigma of Life. The second album to feature the saccharine talents of singer

Ailyn, The Enigma of Lifemay not carry as much weight as its predecessor, 2009’s The 13th Floor, but it’s still much, much better than a lot of stuff parading as Goth metal these days.

Bunch of instantly memorable numbers here, specifically “Winter Land,” a song that is fitting considering the album is being released in the winter of 2011 and this very review is being typed…in the dead of winter. Ailyn could easily be fronting a pop band

as much as a Goth metal band, so credit mainman Morten Veland (who handled ALL instrumentation here, including drum programming – ugh) for finding the right pockets for her voice. Frankly, it would really easy for most of these songs to stumble because of how non-metal her voice is, yet Veland has proven to be quite the prolific composer.

Essentially a continuation of The 13th Floor, a lot of these songs

fall into similar patterns, with standouts being lead single “The End of It All,” the crunchy “The Twilight In Your Eyes,” where Ailyn hits some rather rafter-scraping highs. Elsewhere, “A Seaside Serenade” dips back into Veland’s Tristania days, while “Coming Down” and the touching “This Lonely Lake” round out a batch of notables.

. Luckily, the bulk of The Enigma of Life is top-notch, with some hummable hooks and dashing melodies. If anything, it beats the alternative, which is normally some buxom beauty hemming and hawing over down-tuned riffing with little or no conviction. At least Sirenia don’t try to cover anything up.