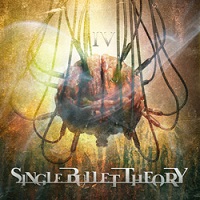 The brainchild of former Pissing Razors guitarist Matt DiFabio, Single Bullet Theory is remarkably still afloat after 11 years in the American metal underground. Such a period of time is a death knell for most bands who have suffered through numerous support slots, lineup changes, and a stint on Crash Music, a label that (reportedly) was not interested in paying its artists. DiFabio should be awarded with some type of certificate for having survived that…

As evidenced by the title, IV is SBT’s fourth album, with DiFabio recruiting a whole new lineup. The name of the game is still meat and potatoes American metal, with a noticeable Pantera and/or Sanctuary (!) influence. It’s actually a really cool mix when done right and at various points, SBT is spot-on, while others they’re stuck in the mud like an airplane trying to leave Cleveland’s Hopkins International Airport.

With a natural production job that is certainly devoid of Pro-Tools (thank you, sweet Jesus) IV sounds like it came from the early 90’s, with the breakaway opening of “Diabolical” coming at you like a freight train ready to jump the tracks. The band’s thrash side manages to click on “Diabolical,” “The Wake of Betrayal” and “Letting Go” all three having mounds of crunch and brutish vocals from DiFabio. The man even tosses in some falsettos on “What Have I?” for off-putting song that can make one cringe if necessary. Sometimes those are best left at home.

Because the album was recorded naturally, some time-keeping flaws are evident, thus kicking IV down a few notches. It also falls into a generic malaise around the halfway mark, with the onslaught of brutality failing to resonate on “Leviathan Smiles” and the way-too-long “Leviathan.” It just feels like SBT’s ideas get the best of them when they should be pairing them down for something more simple and direct. It’s hard to crossbreed Pantera and Sanctuary.