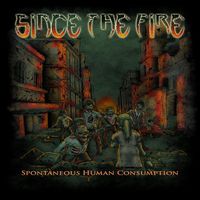 It’s always intriguing to hear a new act that doesn’t feel the need to stick with one simple genre-tag description. Pennsylvania’s Since the Fire are the latest to fall under that category, with a debut that is more about the adrenaline than the name-game. There’s plenty of diversity in this modern package that should find appeal with plenty of different folks.

With a modern sheen, Since the Fire adds bits from the genre’s finest. You can hear a technical death metal edge at points, melodic death metal harmonies, moments of thrashing and death meal groove, sprinklings of metalcore, and more as you move through Spontaneous Human Combustion. The opening “Scour” comes in blistering – thrashy gallops, a punishing death metal breakdown and later groove alongside some intense screams/growls. Despite the pummeling opening, “Dying to Live” later treads into melodic waters, complete with sung vocals and exiting with some catchy melodies before the short acoustic outro. The rest of the album follows suit in one of those two directions, and occasionally a mixture of both. “Doom” opens with some true-to-the-name sounding riffs before picking up speed, while “To Shatter” also uses some clean vocals and uplifting melodies to close the song on an impressive note. “Transcient” is also worth mentioning with its combination of thrashy undertone that switches between some chugging riffs and mid-tempo groove without hesitation (and has a real ripping lead at the end).

The more Spontaneous Human Combustion is played, the more it grows. Listening to the details within the tracks is quite appealing, and the melodic elements add more flavor to the near-constant intensity that Since the Fire provides (no matter the tempo). A modern metal band worth looking into.