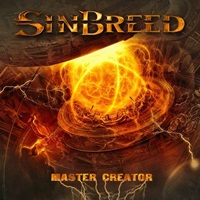 Eschewing bombastic intros to charge right from the start with a double-bass, twin guitar harmony fueled passage that signals opener “Creation of Reality” proves the third album Master Creator from Germany’s Sinbreed means business and harkens back to the earlier, speedier power metal days from their homeland. When keyboards were supplementary in spots and not predominant in taking the hook lead – or when catchy melody lines during the choruses resonate deep in the recesses of brain matter, ready for group participation in live settings. Pared down to a four piece (Blind Guardian guitarist Marcus Siepen stepping down, though BG drummer Frederik Ehmke remains), there’s something to be said for remaining resolute and true to their speedier power vision while adding atmospheric and progressive touches as necessary.

Guitarist Flo Laurin showcases an attacking, relentless nature that acknowledges a love and respect for a number of European and American acts – be it Thundersteel-period Riot meets classic Vicious Rumors for “Across the Great Divides”, Running Wild on the quick picking title track, or early Blind Guardian on the mead-hall speed anthem “On the Run” – with the bagpipes adding a nice cultural texture to the proceedings. Singer Herbie Langhans – fresh from his great guest work on the latest Avantasia album – will get kudos for the gritty, passionate delivery throughout, while also proving he’s capable of stretching into ballad territory for the piano-driven “At the Gate” that would make Deris-Helloween followers smile, picking careful spots to rise up and carry the emotional magnitude load.

Considering a lot of veterans who used to play this style have taken on more bombastic or symphonic layers to their sound (or just aren’t writing killer front to back albums anymore…cough, cough Running Wild), Sinbreed fills a void that ardent, guitar-driven metal fans should lap up. Smart songwriting, loads of guitar and vocal melodies to promote sing-a-longs, and Teutonic delivery gives Master Creator longevity and this band their best effort to date.