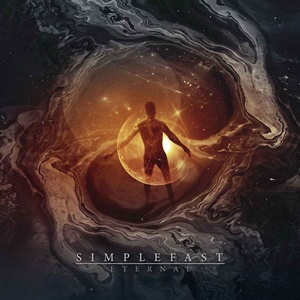 Part of a thriving metal scene in Greece, Simplefast started in 2011 and to date have released the Cursed EP in 2014 plus a full-length follow-up Apocalypse in 2017. They signed to Sliptrick shortly thereafter, and in the interim have a new singer with Yiannis Voulgaropoulos as they release their latest record Eternal. Describing themselves a modern heavy metal act – it’s evident when taking in these eight tracks that the band display an active influence bank of traditional, power, and thrash nuances that keep the sound moving along while being diverse enough to not lose momentum front to back.

The phrasing and structure of most of these songs lays between US power and thrash influences – a musically sharp aspect where the bass play is just as important and beefy as the twin guitar output. Elements of Megadeth and Iced Earth during the 1990’s and a pinch of Disturbed comes to mind when you hear the rhythm gallops and drumming maneuvers for “The Liar’s Truth” or the tribal/cultural hooks within the probable headbanger’s favorite “Tension”. The longest track at 6:26 “Divine Prophecy” delves a bit into some bends and twists that rival Iron Maiden in their prime, along with some spirited rhythms that reflect warriors preparing for battle, some longer melodic instrumental sequences that build through harmony passages that could promote audience singalong moments. A difference maker for Simplefast is Yiannis for certain – his ability to be sinister as well as smooth in more of a baritone-like range gives the material that unusual character, allowing “Nero Reborn” and the title track distinction in a style begging for something a little unique or unexpected. If this scribe had a possible thought for improvement, it would be trying hard on the next go around to create a better kick drum tone for the band, as the splash-style hit does drummer Stratos Midelias a slight disservice to his obvious abilities with his technique, fills, and tempo juggling.

Keeping things in a tidy window under 40 minutes, Eternal will be one of those under the radar efforts for most – as they have solid musicianship and songwriting skills, but probably don’t leap out as a must buy for most in the modern power or semi-thrash fields. Don’t sleep on Simplefast though, as the Greek scene continues to impress generation to generation.