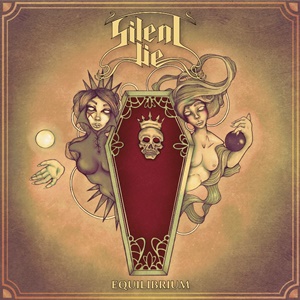 Evolution is a constant – especially when it’s been seven years between records, as is the case for Italian gothic/heavy metal act SilentLie. Equilibrium is the group’s second album, a four-piece naturally developing as musicians and people since their debut full-length from 2015 Layers of Nothing. Personal reasons caused a bit of delay in the group’s momentum, but now we have these ten tracks that showcase a more energetic, blasting sound that is very jumpy, catchy, and addictive.

The effusive nature to the voice, melody choices, and delivery contained within singer Giorgia Sacco Taz has that spine tingling, head turning ability which resonates well in the alternative, gothic, and heavy music communities. The vibrant guitar play from Luigi Pressacco in addition allows the rhythm section to become equally important to lay down that pulsating groove/ proper foundational components to drive every hook home. Evil keyboard spells from bassist Davide Sportiello cast next to dynamic clean verses for opener “Divided”, the guitar passages and soothing vocal harmonies similar to the work of Ghost or classic Ozzy Osbourne. At other points you get the sense that these musicians spend a lot of time studying the Draconian Times-period of Paradise Lost or the playful periods of To/Die/For taken into more of an alternative/modern context – songs such as “Taste of Solitude” or “Modern Paradox” undeniable in solid execution, catchy as hell to just remain cemented in the brain on first or fiftieth playbacks. The down tuned chugging next to a mid-tempo, swinging back beat plus playful keyboard touches makes the title track a vibrant highlight, Giorgia once again slithering around in a moaning, melodic manner before creating this dynamic chorus to treasure. Sending the mix to Grammy Award winning producer Dave Hagen (Mastadon, Evanescence, Alice in Chains) in the USA ensures the band receives a full, modern punch that accentuates all the bells, whistles, and charm contained over the course of this record.

SilentLie is one of those bands that may not necessarily gain acclaim for doing something different or unique – but they will garner respect and attention for sticking to their gothic metal, heavy rock instincts to deliver memorable, distinctive songs. Equilibrium has modern, commercial appeal to the right audience if promoted (and exposed) correctly.