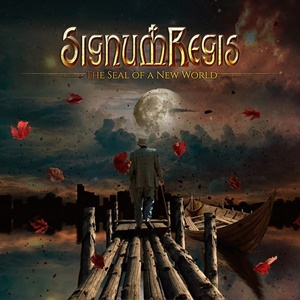 Slovakian quintet Signum Regis have been around since 2007, releasing five albums to date – including a self-titled debut with Göran Edman as a vocalist. Their latest studio record The Seal of a New World begins another chapter for this power/progressive metal outfit – as singer Jota Fortinho enters the fold. Moving on to Beyond the Storm Productions, it’s evident that these musicians still possess the right entertaining mix of sophistication and prowess while elevating their dynamic game in the melody/ harmony department over the course of twelve tracks and over one hour of material to devour.

The foundation of the band’s sound intertwines US/European influences, where the band can be aggressive and heavy while also displaying interesting interplay and spirited vocal harmonies / hooks to capture both the musically inclined as well as conventional consumers. You can expect a fair amount of neoclassic shred breaks from guitarist Ronnie König, 80’s-style keyboard passages, and a steady pounding rhythm section support with European double kick/groove parts as a platform to build upon. You can pull out the aspects of Stratovarius, Helloween, Yngwie Malmsteen, and Queensrÿche influences throughout “Kings of the Underground” and “The City of God”, while adding some interesting dynamic acoustic/progressive bass musical nuances and choir-like charm into “A Memory” that brings Narnia, Rush, and Stryper to mind. Making sure to gain a vocalist up to the task of hitting multiple octaves is key, and Jota possesses those upper pipes to make “Phantasmagoria” and “Fly Away” standouts if you love the work of Timo Kotipelto and others in that ilk. At times the instrumental passages can get a tad long-winded for their own sake – the patriotic “Let Freedom Ring” probably the most guilty offender in that regard – but it never deters from the versatility and obvious seasoned musical abilities executed from front to back on the record.

As much as this scribe loves a great power/progressive metal album, it’s tough to justify a 62-minute record containing all winners and not feeling a bit ‘samey’ when ramping up the neoclassical syncopation parts and eagle call vocal melodies. In the end, The Seal of a New World weighs more to the good than bad, making it ideal for those who love power/progressive metal with plenty of cultural/ circular themes that you’ll retain.