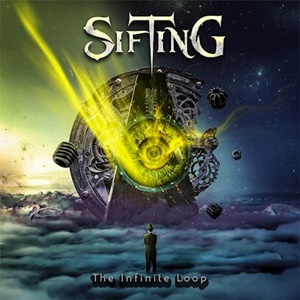 Los Angeles, California is where this progressive metal band Sifting call home – together since 2010 and forming out of a need to take personal tragedy for guitarist / vocalist Eduardo Osuna Gil with the loss of his mother and grandmother in a plane crash into an original entity in Venezuela. After two years developing that lineup, he moved to LA in 2014, bringing in new local musicians to fill out Sifting and they have recorded an EP and second full-length Not from Here since relocating. They’ve been able to receive press/critical acclaim in South America and abroad, plus open tours for Prong, Sons of Apollo, and Felix Martin. The Infinite Loop broadens horizons for these musicians and their following, as it’s a ten-song outing at an expansive 70 minutes – tackling lyrical content from current affairs like the celebrity college cheating scandal to liberty versus first-world elite viewpoints, as well as reincarnation to give the brain as equal a workout as the body when consuming this material.

Musically Sifting combine an intricate, modern heaviness with spirited guitar / tempo workouts, against a vocal edge that is quite harmony-driven for strong melodies. Eduardo and fellow guitarist Xavi Leon know how to shred and throw every arpeggio/neoclassical lick and trick around the fretboard, Yngwie Malmsteen and the Shrapnel sect will be entertained by the dazzling displays of axe professionalism during “A Critical Affair” and “The Fifth Element”. Receiving a keyboard highlight from ex-Dream Theater’s Derek Sherinian on “Ghost of A Lie”, the main riffs possess a sinister Savatage meets Queensrÿche-like presence against an interesting off-time tempo template that shifts and grooves during the verses, allowing Eduardo vocally to get a little theatrical in higher reaches for playful ambiance. When the band chooses to go down a heavier route, you’ll hear some thick Metallica/Megadeth-oriented rhythms and supplemental swinging tempos – “Stop Calling Me Liberty” a highlight in that regard. The longest songs appear as bookends for The Infinite Loop – at 10:45 “Agony” contains a Latin acoustic intro and some heavier, almost doom/electric movements against fluid progressive metal measures, while the title track at 13:18 is a slower, building movement with atmosphere, layers of harmonies, and exemplary challenging instrumental sections a la Dream Theater during their Images and Words / Awake period.

Sifting breathe vitality into the progressive metal landscape because of their international influences and broader, expansive outlook for the genre. The Infinite Loop balances out the need for hooks and melodies with musicians that certainly are masters at their craft, and that’s not an easy seesaw to appease over the course of a record. In the end, the quartet achieve an intense and dynamic offering that should gain decent praise from the critics and consumers alike.