Siegewyrm – Legends of the Oathsworn (Self-Released) 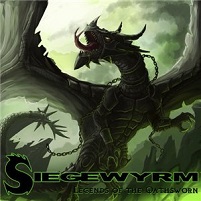 Siegewyrm have been around for a little over three years and you have to admire the moxie they display in such a short time. Hailing from Buffalo, NY the band successfully blend tones of melodic death metal and dip slightly into other genres like black metal, nu-metal and slight tinges of progressive thrash to cull together a unique sound. They have been touring extensively with bands like Sepultura, Job for a Cowboy, and Obituary, effectively helping them to raise their profile in a crowded musical landscape of melo-death bands.

The band’s debut Legends of the Oathsworn is a whopping hour of music, filled with diverse passages of epic sounds and pushing the boundaries of death metal. Legends of the Oathsworn proves this group can forge a musical identity around the ideology of a mythical serpent and delve into this aspect of story telling via the lyrics. They’ve chosen to accompany music with the following insertions: forceful drumming, powerful bass lines and vocals which cover a wide range of harsh growls to clean singing. Everything seems mingled together in a manner that might be hard to categorize at first, but once you get into the crux of the album you will quickly change your mind.

The strongest tracks are “New Breed of Man,” “Legends of the Oathsworn” and “Command and Conquer.” The chugging guitars roar into life, remain aggressive and provide that hard thrust around the melodic passages. You can pick out influential elements from Sepultura, Trivium and Job for a Cowboy seeping into their core sound, but by no means are they a mere copy. The band manages to bend as many elements into the songs and keep it fresh and original sounding.

Siegewyrm have a unique approach and identity towards melodic death metal, and if you like adventurous music this may be the release for you. The mixture of styles are expertly blended together and I am confident this sound can carry them into a rewarding future of further death metal releases of high quality.