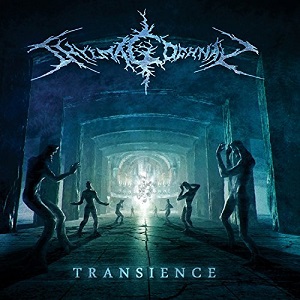 After generating a bit of underground buzz with their first release, Emergence, Shylmagoghnar have crossed their way into the ‘big leagues’ with Napalm Records handling their second release. While the ‘atmospheric black metal’ tag may sway some people in one direction or the other, truth be told, Shylmagoghnar resides in more of a melodic death metal territory.

Seemingly picking up right where Emergence left off, Transience goes right for the grand, sweeping moments with its title track. At 12-minutes, there’s plenty of diversity and soaring melodies to keep the ears attuned to each passing second, and the album also throws plenty of atmosphere to cultivate a stronger presence. A few of the album’s cuts lack vocals, something to keep in mind when considering the length of many tracks within (starting with “The Dawn of Motion”). Interestingly, the band stays just as captivating sans a vocal presence, instead relying solely on the strength of the riffs and melodies to keep them afloat. With the song length at play, the band doesn’t waste much time, whether it’s dishing out some enthralling leads, a catchy or triumphant melody, or turning into a driving riff. Songwriting is clearly at the forefront of all things Shylmagoghnar, and they truly reap the benefits with this album. Those who dig bands in the style of everything from Dark Tranquillity to Dissection to Opeth are going to find something to enjoy.

While it is a heavy album, it’s never one that comes across as overtly aggressive or snarling in tone. Instead, Transience succeeds as being a more pensive and reflective release. One that will draw you in immediately with its aptitude for strong melodies, but will bring you back in to fully absorb everything that Shylamagoghnar has placed into the music. Melodeath fans should be seeking this out, particularly if they missed out on the first album.