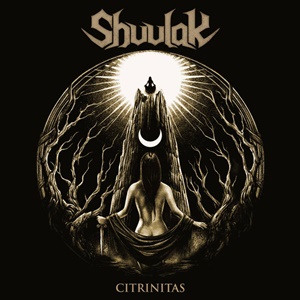 Releasing their third EP in consecutive years, Dutch act Shuulak appear very focused on consistently pumping out new material to never lose a foothold in the scene. Citrinitas contains four tracks and while a little longer than last year’s Albedo, still only clocks in at 13:37. Best to leave the listener wanting more, right? Continuing their pursuit of alchemical enlightenment, there are a couple of lineup shifts since the previous recording – welcome to the fold rhythm guitarist Ricardo Kroon and bassist Puck Wildschut – but the depth of the band’s alternative, groove-oriented metal sound continues to explore progressive, gothic, and modern rock nuances, providing an alluring, enthralling listening experience each and every time out.

The churning rhythm riff foundation and supplementary lead axe melodies courtesy of Eve Laetitia during “Chaosborn” sits in that European gothic meets American power/progressive mold – as if Nevermore, Evergrey, and Moonspell all joined forces in celebration for the versatility of the genre. Exotic guitar measures and a supplementary rhythmic bass/drum interplay fuel “The Chosen”, where vocalist Bastiën Baron delivers his melodies in an ethereal splendor – forceful in spots a la Tommy Victor/ Prong but then alluring and clean almost hitting Buddy Lackey/ Psychotic Waltz measures. Mercyful Fate and Morgana Lefay circular runs come into the forefront for the triad-oriented gallops and doomy atmosphere of “Altar of Gods”. It’s evident that Shuulak enjoy the exploration of many metal facets – streamlining their favorite aspects into performances and songwriting that is vibrant, occasionally twisted, but still very sharp in focused four-minute measures most of the time. The production values rival most current label rosters – punchy drumming, thick bass tones, and a ripping guitar foundation so that Bastiën can slither in, out, and above the proceedings like a theatrical court jester.

Shuulak illustrate the wide array of output a set of musicians can deliver if willing to explore their passions and dig deep into their ideas. Citrinitas should attain a bigger status for the group – and hopefully allow them to rise through the ranks and obtaining even more followers to the fold.