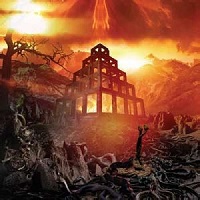 A combination that just makes sense: Wino + Neurosis + Om + Melvins. All serve their own purpose/function in their own right, but fall from the same wall ‘o sound tree. And what could have been a sonic pigsty, turned into a cohesive, near earth-rattling combo, as this self-titled debut has a lot of life to it and loads of potential, too.

All four bands (let’s not forget bassist Al Cisneros was once in Sleep) are dipped into, with the Wino/Neurosis combo getting the first nod on “Solar Benediction.” It’s a bit of a revelation to hear Neurosis main dude Scott Kelly sing

over swampy riffage, but here he is, doing just that. Then Wino drops in one of his patented blues-y solos and it’s on.

“Pyramid of the Moon” is the linchpin of the album, a chill, laid-back jam that sees the quartet take a back seat to the song

. “Blind For All To See” has this off-putting Ted Nugent “Stranglehold” vibe to it, probably due to Cisneros’ winding bass line, while “The Architect” is clearly a Wino jam (just listen to the opening riff), one that glides into The Obsessed/Sabbath territory with ease.

Reportedly recorded over the span of three days (wow, that’s unheard of nowadays), Shrinebuilder serves its purpose as the ego-less, organic side-project, but not-really side-project of four veritable rocks of the stoner/doom/metalgaze scene. This is something that had to be good…and damn right – it is.