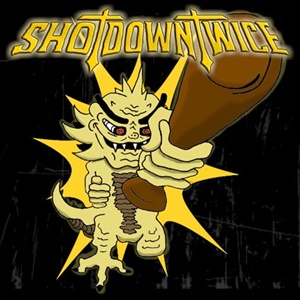 Hailing from Hamilton, Ontario in Canada, Shot Down Twice formed in 2019 as seasoned musicians in other outfits with experience across the metal / heavy music landscape. Releasing their debut EP Got Up Once in the fall of 2020, they return with another six-song self-titled salvo that intertwines a love of classic hard rock and heavy metal to twist things into an energetic fireball of an aural outing. Listeners can expect a potent, in your face experience through this material, chock full of aggressive and melodic guitar tones, solid rhythm section components, and a blistering vocal performance to bring all these tracks home.

The initial mid-tempo riffing and supportive groove that kickstarts “By Design” starts the proceedings in a go down fighting fashion – guitarists Jeff Wilson and Pat Rogers unfurling all kinds of bluesy/southern-like licks into a classic hard rock/metal context, channeling the best of Zakk Wylde and Michael Schenker tricks in the lead break. Elements from Judas Priest to Dio, Black Label Society to even 90’s grunge or punk factor in when it comes to softer and heavier sequences, or atmosphere and attitude as “At a Loss” takes on a more metallic sheen while “Long Haul Blues” contains acoustic strains before ramping up the electric proceedings. The cornerstone to Shot Down Twice gaining more appeal lies in the versatile vocal abilities from Carmen North. Her ability to be playful and sassy when called for in the verses for “Talk to Me”, and then belt out a savage high scream or be more punk-oriented in angst/approach for “Undermine Overthrow” makes her a multi-level threat, sure to grab audience attention within the first song and keep them in her grasp until the conclusion. If there’s only a minor disappointment, it’s the fact that we have only six tracks to absorb, process and enjoy – but what a thrilling ride this almost thirty-minute effort entails.

Shot Down Twice contains heart, passion, and full understanding of their approach to bring classic hard rock and metal with a bit of angst, punch, and grit from other eras to the table. Keep your eyes on these musicians – they have those special details to key songwriting and execution components to go places.