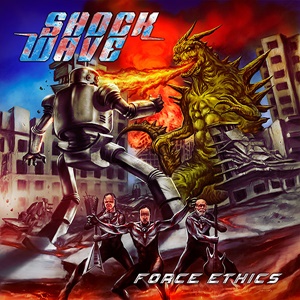 Originating in 1987 from Spain, Shock Wave remained active in their first incarnation until 1992, only recording one demo in February 1991 during that run. Moving away from thrash into other extreme outlets of death metal, gothic doom, and black/thrash, they tried to reunite a couple of times over the decades – but things didn’t gel permanently until 2020. They would release an EP for The Omega Communion in late 2020, setting the stage for this full-length in Force Ethics. The trio transport themselves back into that early thrash atmosphere, creating eleven tracks of crossover pummeling material – none the worse for wear while gaining that seasoning and knowledge of the genre which proves their love for the movement.

The thick chugging riff parade and intermittent melodic accents from guitarist JC Insekkton hasn’t lost any intensity throughout key cuts like “From Nothingness to Misery” and “Rubbish Under the Carpet” – collectively drawing from the Bay Area/East Coast US and European camps for versatile inspiration and attack mode/pedal effects enhancement. Stop/start transitions allow plenty of nifty tricky interplay between these musicians while vocally Floren races along to the music much like an angry militant commander – conjuring images of Nuclear Assault’s John Connelly gravelly roar in parts of the crushing “Endless Ammunition”. With song titles like “Vegan Predator” and “Anger Is for Amateurs”, you get the sense that Shock Wave stick to a mix of social/political and current events topics when looking at the lyrics – delivered in the same forceful manner as the music. A left-field entry “Marble Skin” exudes a bit more atmospheric, melodic confidence, the narrative accents and calmer rhythms aligning with a bit more melancholic textures – something that the group may wish to explore more down the line.

Many will be a little disappointed in the lackluster drum performance (not sure if it’s programming or real), but the solid production skills allow a great balance as far as the instrumentation and vocals as far as clarity and heaviness. Force Ethics puts Shock Wave on the map once again – now it’s only a matter of digging deeper into that inspiration well to craft more songs next time with a bit more dynamics and originality.