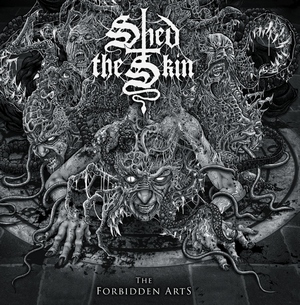 Straight-up, no frills death metal. A treat that we seem to get less and less of nowadays. Maybe due to that, when it comes it feels even more enjoyable. Shed the Skin have unveiled their third album, The Forbidden Arts, and it hits just as hard as you would expect it to, given the members other acts (including Incantation, Ringworm, and Beyond Fear).

Shed the Skin owes much of its sound to that of the ‘90s death metal movement, though they don’t really paint themselves into a corner with a particularly ‘geographic locale.’ Instead, they simply focus on the finer things in death metal, and let the music do the talking. There’s a nice mix of faster and mid-tempo stuff, which keeps it more playful and energetic. Couple that with strong grooves, just enough melody, and a ‘hit like a sledgehammer’ approach, and it’s a tried but true package. Opening “Skeletal Firestorm” gets things started quickly in this manner, with driving speed and galloping riffs along with upfront and meaty growls to show you exactly what to expect. Later the tempo slows down and offers more in the realm of dreary melodies without losing the impact that they quickly showcased and push the tempos back into effective grooves. The way this track in particular works is pretty exemplary of the whole thing – while it may start to be a bit predictable, the use of melody and great tempo changes keep you interested for the entirety of 47-minutes.

Nothing wrong with a little bit of meat & potatoes death metal done right. Shed the Skin have a strong sense of what should work in death metal and they play to all of those strengths accordingly.