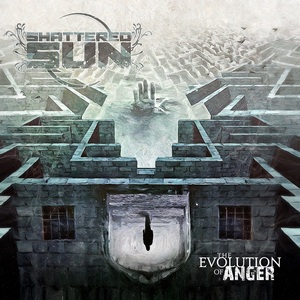 Is it too late to get another bonafide classic from the metalcore genre? If you only look to the ‘big’ names that have survived to date, perhaps, but one has only to look towards Texas and the gentlemen of Shattered Sun to realize that the genre still has some vitality left in it. The Evolution of Anger might just be the strongest album of this style in years.

For those who may have missed out on their first effort (2015’s Hope Within Hatred), Shattered Sun take the metalcore template and add a healthy dose of modern thrash and melodic death metal. The first thing that stands out on The Evolution of Anger is just how appropriate the album title is. The band comes out with all guns blazing on the opening “Keep Your Eyes Shut” – it’s a visceral and pissed off approach that’s more rooted in thrash than anything else. “Terminal” later echoes this sentiment with a frenetic thrash vibe taking the forefront, only relenting at the chorus. Some nice, thick grooves also aid in this area, with “Blame” and “Out for Justice” being some of the best examples here.

This more aggressive and intense approach is one of the strongest parts of Shattered Sun’s sound circa 2017 but it’s actually outshined by something else that had plenty of promise on their debut: some genuinely gorgeous melodies to counter the anger. “Like Gasoline” has some lovely Gothenburg-inspired melodies and one of the album’s strongest solos. In fact, the guitarwork is where the band truly ups the ante compared to their peers, often engaging in tasty leads and solos and soaring melodic riffs (see “Burn it Down”) that almost instantly stick in your head. Lastly, there’s the clean vocal work of Marcos Leal, which has jumped up from the debut, most notably in the closing “Hope Dies.” His bark is strong enough to give the heavier sections some power, but truly shines in some of these more melodic areas (see also “Die for Nothing”).

With improvements all across the board for their second album, Shattered Sun steamroll themselves towards the front of the melodic metal pack with The Evolution of Anger. There’s a fantastic juxtaposition of frantic aggression and high-flying melodies that elevate themselves far above the norm due to the sharp songwriting and energy. In one word: excellent.