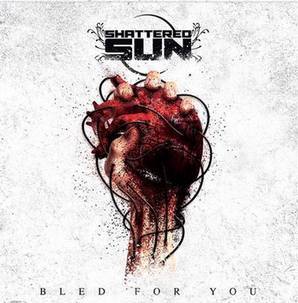 Three years ago, Shattered Sun dropped their excellent second full-length, The Evolution of Anger, and then kind of disappeared for a bit. Three years later, the band has returned with a new album, new label, and a twist on their developed formula. A lot to take in, but Bled for You stands tall in the end as the band’s strongest work to date.

Given their (mostly) metalcore beginnings, and then leaning further into thrash on their second release, it shouldn’t be too surprising to find some more alterations to their formula for album number three. This time around, it’s safe to say the metalcore elements are mostly on the backburner with a more modern/melodic metal piece coming to the forefront, along with a side of hard rock. Sure, the first single “Until it Breaks” has some decided heaviness to it but it flies a melodic flag just as high. Whether it’s the soaring guitar melodies or vocalist Marcos Leal’s singing, there’s a ton of hooks to latch onto. Likewise, “Never Enough” knows how to throw around some metallic heft around with some thrashy riffs at times, but there’s also more rock-ish moments that mesh surprisingly well with the driving sound the song generates. The band sounds more confident than ever in reaching deep into melodies too. “Shades of Melodie” and “Never Looking for Tomorrow” are some of the softest sounding tracks the band has done, but they still find ways to integrate some strong riffs and leadoff melodies into the mix to keep them from diving too far into trope-y ballad territory.

More than anything, it seems Shattered Sun has focused on generating memorable songs above all. There’s not one that doesn’t stick out in some way or form. The band’s musicianship shines, even with less overtly aggressive material, and gives the material plenty of long-lasting depth. It seems like a fresh start for the Texas act, and one that will hopefully deliver them into well-deserved successes. Bled for You should satisfy anyone looking for some melodic metal that can carry as much emotion as it does aggression.