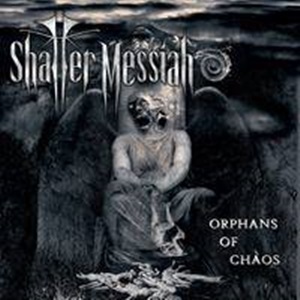 The power/thrash band Shatter Messiah call Akron, Ohio home base – together since 2006 while maintaining a decent lineup of seasoned players. Guitarist Curran Murphy and drummer Robert Falzone met up in Annihilator, and latest bass acquisition Kelly Conlon served some time in Death. After a long seven-year absence between 2006’s God Burns Like Flesh and 2013’s Hail the New Cross, the fourth studio album Orphans of Chaos hits the streets and continuing their steady excelled creativity in a street level, take no prisoners manner.

The roots of the quintet’s sonic outlook straddle melodic power and thrash ethics of a thicker variety – still heavy but going deeper into a template built in the 1980’s and early 90’s from artists such as Heathen, Metal Church, and Vicious Rumors- as well as possibly a long-time favorite such as Iced Earth. Fellow axe slinger Pat Gibson along with Curran lays down twin rhythm combinations and fiery lead play that can be shred/neo-classical laden, yet supper tasteful – even darker at times during “Nothing Friend” while the circular themes embed deeper in a Forbidden-ish texture one moment, then progressive and melodically enticing the next on the follow up “The Mad Man Lies”. Occasionally delving into staccato/lower-tuned themes keeps Shatter Messiah away from being totally 100% throwback, bringing back Curran’s time in Nevermore for sure during the appropriately titled 7:38 “Doom” where vocalist Michael Duncan uses a distant, measured delivery that is succinct and engaging.

Stacking the album with shorter, compact songs at the front allows the listener to engage quicker with the riffs, hooks, and tempos for “Fixx For Demise” and a fiery “Shallow” follow-up (the latter featuring sick double bass and semi-blast passages from Robert), while the second half contains some of the more challenging material for the five-piece to stretch out a little bit in terms of chops and harmony flow (“Disruption” a particular highlight). What’s most enjoyable regarding Orphans of Chaos is it’s not trying to be the most technically intricate offering to grab a wow factor – the band preferring to write and perform as a unit and allow the individual songs and dynamics to speak for themselves.

Impressive once again, those who enjoy the aforementioned power/semi-thrash crossover in a progressive, very melodic US format need Shatter Messiah in their metal collections.