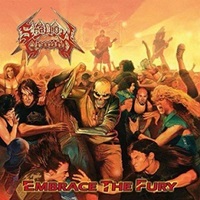 Digging deeper into my new local CT scene, this journalist first took in Shallow Ground from Meriden at a thrash/death show in New Hampshire prior to moving – immediately picking up their debut album from 2013 The End of Everything. Here we have the follow up Embrace the Fury, a 9 track, 43 minute plus effort that embodies all of the classic power/thrash elements necessary for mandatory headbanging, neck wrecking, and solid spasmodic body destruction.

First together in the mid 1990’s, the second resurrection with vocalist/guitarist Keith Letourneau and fellow axe man Tim Smith took place in 2009 (new drummer Kurt Regis joining then, while ex-bassist Nick Ziembicki left shortly after the finishing of this record) – so do not mistake the band for jumping on the latest post-2000’s thrash wave as these gentlemen grew up when Metallica, Forbidden, Exodus were slugging it out in the trenches. After numerous playbacks what impresses me most is the exemplary timing and musicianship on display that you often don’t get from most thrash bands that want to go on full bore attack mode all the time. The best albums possess those dynamic nuances, interludes, shifts of tempo and intricacies that captivate, aurally alerting the listener to deeper investment – and you get plenty of that in the more Forbidden-like epic “Looking Glass” (think Twisted into Form brilliance) or the layered guitar buildups throughout “Khan”.

Keith and Tim know their thrash as well as power, progressive, and traditional history – delivering jaw dropping riffs and lead breaks that service the proper needs of the song, accenting their shred or melodic moments with extra wah-wah or whammy bar action. Never afraid to throw in those moments at the start to launch “Brace for Impact”, the short acoustic/electric instrumental “Eye of the Storm” mid-way through provides another sonic breather while being tasteful and musically savvy. Gang vocals during the choruses push “F.I.U.” and the swarming, circular “Human Flame” into the upper tier of favorites, as Keith’s main delivery is militant yet clear, very much in that Matt Barlow mid-range mold.

Marked improvement on the production front from producer Nick Bellmore at Dexter’s Lab Recording Studio in Milford, CT (beefier guitar tones, punchier bass and drums) sucks you right in from the Slayer-esque “Once Again” opener as Shallow Ground remind me of the more adventurous semi-progressive thrash acts during the late 80’s and early 90’s – aware of versatility and musicianship while adhering to the genre’s tenets and principles. Topics from metal pit etiquette to ancient emperors, the military and social/government struggles give the listeners thought provoking words – an ideal marriage to the musical ideas.

Those who love records like The New Order, the aforementioned early Forbidden period, and a touch of Exodus/Heathen will find Embrace the Fury intriguing and mandatory.