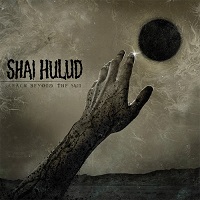 About time Shai Hulud has a normal-sounding album title. Reach Beyond the Sun sure beats Hearts Once Nourished with Hope and Compassion, as well as That Blood Within Ill-Tempered, right? Then you throw in the fact New Found Glory guitarist Chad Gilbert handles all the vocals here, and it’s all sorts of craziness. A band that was originally at the forefront of the melodic metalcore movement (read: the bands that swiped Gothenburg riffs and integrated them into hardcore), Shai Hulud keep on swinging on Reach Beyond the Sun, which situates itself as complex as some of their album titles. Therefore, shouldn’t this really be called Sun Beyond the Reach?

Gilbert (who sang on the aforementioned Hearts Once Nourished) takes on a rather prominent role. His one-toned bark is neither grating nor all that threatening; it’s like “tough guy-lite” hardcore vocals, done with the occasional gang vocal to help matters out. Naturally, shout-alongs take front-and-center on opener “The Mean Spirits, Breathing” and “I, Saturnine” (these guys sure like comma placement!), both of which meld the abstract riffing of Matt Fox, along with springy melodies. The rage is brought forth on “A Human Failing” and “To Suffer Fools,” while the more post-oriented sounds of “Medicine of the Dead” are ample complements to the band’s wholly disorganized sound.

Reach Beyond the Sun positions itself with enough brash tactics and un-hardcore moves to garner attention from the more metallically-inclined. While Gilbert’s involvement might be a deterrent for some (remember when New Found Glory was on MTV all the time?), the jist of the matter is Shai Hulud remains a unique entity in a hardcore scene that swoons over bands willing to blend into the scenery.