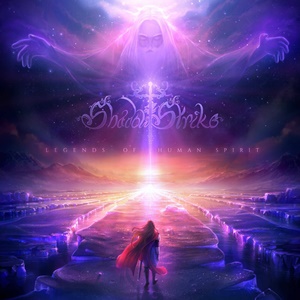 Ardent followers of speedy power metal probably remember the heights of popularity during the 1990’s for the genre. Acts like Helloween, Gamma Ray, Stratovarius, Sonata Arctica, and offshoots gained vast press, solid touring combinations, and higher festival billing. The luster wore off a bit, then Dragonforce caught the attention of a new generation – which in turn has led to a rebirth of sorts. Even infiltrating the United States – as is the case here with Long Island, New York band ShadowStrike. Aiming to deliver a fully immersive musical experience, their debut full-length Legends of Human Spirit captivates and enthralls the listener due to the layers of guitars, bass, keyboards, drums, vocals and outside narrative/cinematic elements to provide an all-encompassing journey into their aural landscape.

We know that you can expect lyrics featuring battles, dungeons and dragons, swords and sorcery, elves and gnomes, taking the listener from the present world into another universe – titles such as “The Fiery Seas and Icy Winds” plus “Heart for Yearning Journey” obvious keys to that marker. The proficient skills on all instrumental fronts for the quartet is breathtaking – sweeping arpeggios and thunderous bombast of a power/progressive nature, showcasing immense training and stunning chops. Tempering this with proper melodies and hooks is not easy – but ShadowStrike know when to inject the perfect choir-laden chorus or supplementary background vocal support to aid the cause – “Fields of Valour” an early favorite, the triumphant transition during the instrumental section and dual keyboard/guitar harmonies stunning along with some exotic-oriented orchestration. While a majority of the material is quite speedy, the times when the band chooses to be a little more reserved and mid-tempo can be quite intriguing and satisfying too – “Where Sleeping Gods Await” taking on operatic strains with galloping riffs and dramatic melodies that can go from serene to siren, as well as including a brief sax break amidst the normal keyboard/twin guitar syncopation.

Guitarist/vocalist Matt Krais deserves kudos for projecting a confident, multi-octave voice beyond his killer songwriting and axe play abilities – he does have more of a European flair and knowledge of where to emphasize key notes for added versatility in emotional highs and lows. Some of his best work occurs on the uplifting “Forever As One” where he switches up matching the feel of the verses with more drawn out notes during the bridge and chorus and the ten-minute plus epic “Gales of Winter” that is a veritable treasure trove of ShadowStrike mastery, grabbing for all the power and glory that this sub-genre can serve up in a Dragonforce/Rhapsody duel for the ages, again featuring a Metallica-ish twist with bluesy guitar parts and a heavy mid-tempo instrumental riff midway through. At ten tracks and sixty-four minutes, there could be some listeners who may balk at the lengthy playtime – but rest assured all passages make sense and monotonous will not be an adjective to ever describe these proceedings.

You can tell years of work went into this record, and it’s well-worth the time and investment. Legends of Human Spirit should put ShadowStrike top of mind for those who love speedy power/progressive metal, especially with uplifting melodies – and could be one of the best records for an unsigned band of the decade.