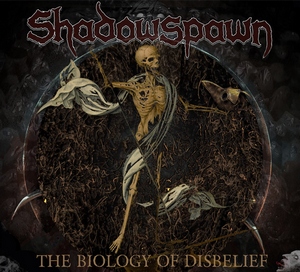 With one previous EP and full-length behind them, Danish Shadowspawn return for their third release in The Science of Disbelief. If old school-influenced death metal is your jam, Shadowspawn bring a version that is aggressive and soaked in groove. Right up your alley if you dig Benediction or Asphyx.

At first listen, you’ll pick up on the meaty guitar sound that Shadowspawn has. It’s one that you can tell is culled from old school death metal bands (see above), but the heaviness has a smoother and modern appeal to it. An important piece because they capture that timeless death metal spirit without being lumped into the old school revival. It also allows the grooves to really take a big bite when they need to. The title track has some absolutely stomping sections, bolstered by the thunderous production. This is war-like, tank death metal too if it wasn’t obvious from the comparisons. Expect more mid-tempo grooves than anything else, which suits the music just fine. It allows the band to really craft some suitable melodies into it without going ‘too far,’ so to speak. It’s more of a focus on songwriting than just trying to out-brutalize the next band in line, and songs like “Dark Dawn Take Me” and “Obliteration Exceptional” work best because of their ability to weave in strong hooks into an otherwise steamrolling operation.

The Science of Disbelief stands out in its ability to combine massive walls of groove while still giving a big nod to the past. The riffs in each track manage to find their way into your head, and Shadowspawn provide an environment that’s easy to get lost in the simultaneous catchiness and abrasion of it all. Just some good ole death metal to be had with this one.