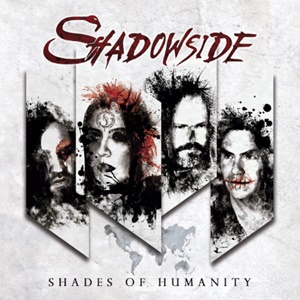 Six years beyond their third album Inner Monster Out, Shadowside took time to evaluate their songwriting stance and gained ex-Hammerfall bassist Magnus Rosén in the interim, aiming for personal distinction. Shades of Humanity as the fourth studio record embodies an outlook that teeters between commercial musical hooks and radio-friendly choruses, while also being diverse and dynamic in terms of subject matter and heavy metal standards. The 11 songs contain logical transitions plus added harmonic moments that propel the arrangements into a brain/body lock that will keep consumers satiated.

The band use a power metal foundation that’s muscular versus flowery (think Brainstorm, not Freedom Call) and build around the constructs with lower tuning to add heaviness, plus occasional staccato-driven chords – allowing for diverse melody choices in the singing department not dissimilar to Kobra and the Lotus latest recordings. “Beast Inside” and the follow up “What If” exemplify this aspect, the latter featuring some tricky cymbal juggling and keyboard cyber swirls to intensify the aggressive atmosphere. It’s not easy to tackle personal subject matter like the first video/single “Alive” – vocalist Dani Nolden discussing her lows and numbness due to depression, supplemented by an addictive guitar foundation and tasteful leads from Raphael Mattos that sit in an Evergrey playbook. When you want a faster adrenaline rush with gritter vocals, flashy double bass, and uplifting rhythm chugs look no further than “Make My Fate” – a probable live staple to make the crowds rise.

An interesting twist for Shades of Humanity comes in many of the topics tackled for the lyrics – it’s not very often you have discussion about abortion, moral values, and the Mariana dam disaster within their home country of Brazil, giving them a social compass that engages and connects to their fanbase. It beats all that swords & sorcery, magical/mythical imagery from other power acts, right? Properly seeking out Fredman Studios and Fredrik Nordström to handle the mixing/production duties, Shadowside appear ready to gain broader acceptance from melodic power metal fans who desire heavy and catchy arrangements in a slightly similar stance to the Kobra and the Lotus or maybe Battle Beast. Let’s hope we get a fifth record out quicker than six years, lest they lose the momentum achieved within. 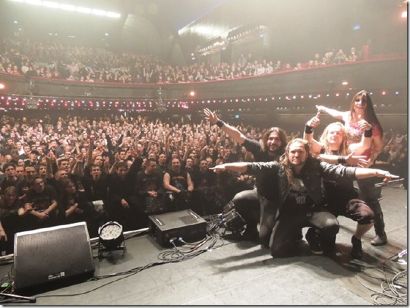 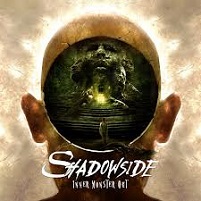