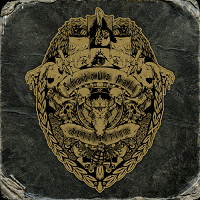 Back to ripping it out…a wise move for Shadows Fall, who floundered in major label land with Threads of Life. For a band that in just about every aspect is better than Lamb of God and Killswitch Engage, the retreat back to indie label land probably served as fodder for Retribution, an album that is indicative of a band itching to climb back into the thick of the American metal scene.

Retribution follows the template laid out with 2004’s War Within, starting with an acoustic intro (“The Path To Imminent Ruin”) which segues into “My Demise” a typical SF thrash romp. Lead single “Still I Rise” is an excellent cut, highlighted by a catchy chorus courtesy of Brian Fair. Fair continues to grow ever so steadily, as evidenced by “The Taste of Fear” a song that allows the dreadlocked frontman to test out the more melodic side of his voice.

The centerpiece of the album is “King of Nothing,” which is arguably the band’s best song since “Stepping Outside the Circle.” Bristling with a syncopated, pile-driving main riff, “King of Nothing” is given an extra boost from LoG frontman Randy Blythe, who bellows “Quit your fucking crying,” a barb toward the pill-reliant youth of America.

Thrash rules most of the album, as “War,” “Embrace Annihilation” and “A Public Execution” see SF mold their melodic, modern Bay Area thrash into focused, streamlined songs. The ballad “Picture Perfect” is perhaps the only dud here, but beyond that, it’s nine winners out of ten.

One cannot underestimate just what a massive blow to Shadows Fall’s popularity the Threads of Life record was. It set the band back several years, so much so that they’re opening for Five Finger Death Punch, a band that couldn’t hold SF’s jock any day of the week. Such is the times we live in.Retribution, though, is a solid investment.