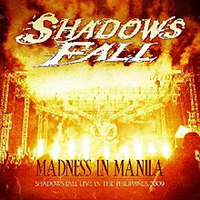 Seriously, how long are Brian Fair’s dreadlocks going to get? They’re practically touching the floor, which makes one wonder if the dude has a good chiropractor or has a really strong neck. We’re guessing the latter. Nevertheless, the second DVD release from Shadows Fall, Madness in Manila: Shadows Fall Live in The Philippines 2009 catches the long-running Mass-holes in front of a capacity crowd in (you guessed it), the Philippines. And just like their last few studio albums, it’s nothing remarkable.

Big stages seem to swallow Shadows Fall for with the exception of Fair, the band is pretty stationary. Of course they’re tight-as-fuck, the result of years upon years of being on the road, but Fair’s dreadlocks are the only thing worth watching during this 16-song set. Well, maybe lead guitarist Jonathan Donais is worth a peak – dude is clearly one of the more underrated players in the scene, just check out his dazzling and melodic lead work during “Crushing Belial.”

All studio albums prior to last year’s Retribution are culled from, although “A Public Execution” from said album gets an early airing. Songs worth noting include “Forevermore,” which could be the only good song from 2007’s way-average Threads of Life, “What Drives the Weak,” the bruising “Power of I and I,” and “Thoughts Without Words.”

Extras are minimal, save for a few live songs from Japan, making the purchase of this a little touch-and-go. Crowd shots are minimal too, which doesn’t make this set all that intense, something that was a given during the band’s formative years when it was readily apparent they were going to be the break-out band of American metal. Obviously, that hasn’t happened and now the question is if Shadows Fall are just playing out the string or will they get out of their comfort zone. This DVD doesn’t answer any of that, nor should it have to.