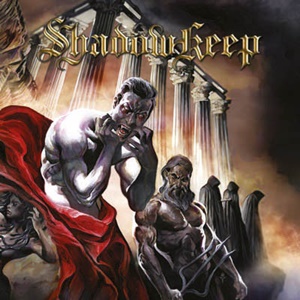 Originally developing their progressive power metal platform just as internet message boards took hold in the late 1990’s, Great Britain’s Shadowkeep quietly built a following through a steady stream of EP and album offerings. Records like Corruption Within from 2000 and A Chaos Theory in 2002 put the band into the international landscape with riffing, melodies, and songs that recall the heydays of Crimson Glory and Queensrÿche. Seemingly falling off the radar, it’s been a decade since their last studio record – and thanks to a proper veteran singing boost, this fourth self-titled full-length should make up immeasurably for lost time, while also exploring a bit of the old-school US power influences in the process.

When you have Helstar vocalist James Rivera steering the microphone duties, there’s no shortage of versatile, multi-octave activity throughout to keep ears pinned and riveted. Be it Halford-esque screams during “Flight Across the Sand” or the lower, chill bump emotional melodies with complimentary harmonies during the chorus of the acoustic ballad “Little Lion”, his understanding of suiting the needs of the material ensures little worry that Shadowkeep have the proper singer for their style. Guitarists Nikki Robson and Chris Allen churn out driving power riffs and progressive nuances that challenge the listener while also adding tasteful circular refrains and licks that keep heads pounding – check out the Destiny’s End-like “Angels and Omens” or the spider web twin harmonies that fuel the instrumental “The Sword of Damocles” as proof that these veterans have not lost their magical touch. The pacing of the album works very well, as the two epics appear early and late against otherwise normal three to five-minute plus arrangements – delivering a solid 55-minute package that doesn’t overwhelm with excess information.

Highlights change through every successive pass, but it’s hard to discount the nine-minute plus epic closer “Minotaur” which features a series of mesmerizing riffs, tightly executed time signature changes, and a calmer acoustic/whistle mid-stream atmosphere twist that Priest/Maiden mavens love plus the already mentioned “Angels and Omens”. The union of Rivera and Shadowkeep hopefully can be one that continues forth even with the former’s busy singing schedule, as this is a blazing reminder of what can happen when progressive power metal musicians execute at the highest degree possible.