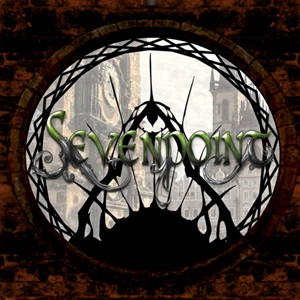 Starting to find out more about bands from the Salt Lake City, Utah scene – Katagory V were veterans of the progressive metal scene from 1999-2014, while Visigoth rides the power/heavy metal crest currently on Metal Blade. The quartet Sevenpoint represents another fresh entry, forming in 2014 and issuing their first full-length self-titled record. Sitting in that traditional meets power world where the guitars float between heads down speed passages and solid hooks that rock, the eight tracks definitely epitomize more of a mid-80’s/early 90’s throwback sound – especially in terms of the progressive-oriented, multi-octave vocals.

Guitarist Glade Robinson plays multiple roles in his rhythm and lead duties – exuding confidence in a heroic manner while not forsaking the task of building proper foundations. A lot of his speedy work against his own harmonies gives “Burn” horns blazing approval, while the follow up “Master of Shame” gives off impressions that he’s studied a lot of British axe greats from Maiden and Priest to Blackmore in learning his craft. Duane Robb has that robust bass tone you need to convince a lot of metal heads right out of the gate for “Maimed”, while drummer Chad Bennett rolls around his kit for fill accents and keeping time as a trooper.

Vocalist Hermes (RMZ) has a propensity to be very rhythmic with certain melodies and then very high wailing and sustaining in others. The problem is, he hasn’t quite got that proper pitch control thing down pat even if there are similar qualities to Rick Mythiasin (ex-Steel Prophet) during the straight forward “Different Breed” – becoming more obvious during a softer to heavier arrangement like “Muse” where he glides up and down his register aimlessly. For Sevenpoint to gain more traction against the thousands of bands also looking to move up the ranks, this area needs improvement on the next outing (along with hopefully a bigger budget for production).

Sevenpoint have that sound that may have made an appearance on one of the latter Metal Massacre series of compilations – in the pocket with potential, just not quite at the quality of blowing most away.