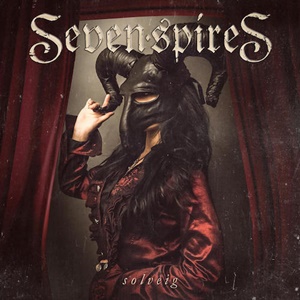 Aiming to expand the symphonic metal genre through film score, power, extreme, and classical/orchestral nuances, Seven Spires has made quite an impact on the current metal marketplace through their impressive live performances and previous EP The Cabaret of Dreams. It’s rare to find a quartet in their late teens to early twenties so driven and focused on their craft, consistently refining and innovating as best as they can for the sake of a memorable final product. Three years later we reach the full-album status with Solveig, consisting of a re-recording for the EP (Act One of the conceptual piece), and eight newer songs that become Act Two. The story of a lost soul and his journey through a Demon’s sunless, neo-Victorian underworld has throwback romantic/renaissance textures, transporting to bygone eras centuries before that give listeners a thrilling, multi-sensory journey.

The differences between the earlier recordings and new versions come up in a deeper understanding of orchestral layers, enhancement of certain extreme/clean melodies from Adrienne Cowan, as well as the fluid and expansive bass abilities from Peter Albert de Reyna – most evident on “The Cabaret of Dreams” and the Kamelot-esque follow up “Choices”. Jack Kosto has the intricate, arpeggio free-flowing skills down pat – consistently unleashing fiery licks and tapping tricks at his disposal, but maintaining proper restraint and song advancement at the heart of his riff choices and transitions, most evident on the blackened speed twists for the conclusion of “Closure”.

When it comes to the newer songs, Seven Spires choose to broaden horizons once again as far as their sonic output. “Stay” properly channels those melodic power affinities, Adrienne choosing a dramatic, Khan-esque delivery while the guitar hooks and orchestration provide uplifting serenity. The ballad “Depths” gains darker ambiance through Peter’s measured bass notes and Adrienne shifting between savage Sebastian Bach-oriented screams and a comforting lower register during the verses – Jack rolling out an emotive, sparse lead that again shows remarkable taste. “Ashes” is another uplifting power metal track provides plenty of sing-a-long moments during the chorus, already a live highlight locally that in many respects has a little of that cinema/Disney-esque charm because of the bright keyboards and matching vocal feel. And for those that want more of their melodic death/blackened side, one only need to look at “The Paradox”, while the longer epic “Burn” at 8:36 showcases what Seven Spires can do if given a wider canvas to pain diverse instrumental strokes and evoke theatrical-oriented shifts in terms of the mood.

Every once in a while, you manage to come across a band in the underground that you can feel is going to go places. Such was the case when this scribe first caught Seven Spires opening for Amaranthe back in 2015. Having already released their first EP at that point, The Cabaret of Dreams, such began the waiting game to see what this group would do with their first full-length. Well, that day has come, and Solveig delivers more than one could have hoped for.

Seven Spires’ most defining element is that they can be a musical chameleon and still sound like the same band. A simple description such as “symphonic metal” would deny them of so much of what happens within Solveig. One can argue that much of Act 1 (a re-recorded version of The Cabaret of Dreams) sits well within that framework, but even there you have bouncy, upbeat cuts like the title track squaring off against darker material like the glorious “Closure” (that flirts with more extreme elements) or the dreamy ballad “100 Days.”

But the best is yet to come with the all-new material in Act 2. Here Seven Spires really takes flight into wild diversity – fluid and metamorphosing through a number of genres without sounding like a hodge-podge of ideas. “Stay” kicks things off with some powerful melodic metal, yet follow-up “The Paradox” dives headfirst into more melodic/symphonic black metal elements a la Dimmu or Carach Angren. “Serenity” does melodic death metal better than most acts that do it for a full album. “Distant Lights” moves back to more upbeat power territory while “Depths” then hits a more melancholic approach as it slowly builds its way up. “Burn” gives them more wiggle room to hit different pieces within a single track, and then nothing short of a smile will hit once the soaring chorus of “Ashes” kicks in, wrapping the album with a triumphant bow that the theatrical instrumental “Reflections” elegantly extends.

While one could wax poetic about the entire band’s efforts here, a little spotlight should go towards vocalist Adrienne Cowan and guitarist Jack Kosto. Both seem to play well beyond their years, and their dynamic is cultivating something special here. Kosto’s flashy yet tasteful leadwork throughout with varied riffing approaches bodes well for even greater things to come. Cowan also proves herself to be a ‘Jill of all Trades’ in being to hit highs, lows, growls, screams – you name it, she can pull it off with finesse, power, and grace.