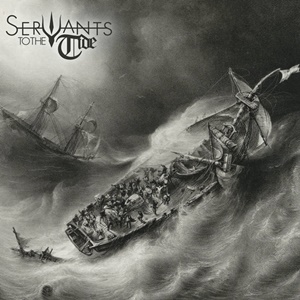 Paying homage to his heroes in epic doom metal, Servants to the Tide is a trio formed by guitarist/keyboardist/bassist Leonid Rubinstein, who recruited vocalist Stephan Wehrbein and drummer Lucas Freise to execute his ideas and bring them to life. Recording the album over the last three years, this self-titled effort contains five full tracks plus a short intro, encompassing a wide array of melodic, melancholic, dramatic, and breathtaking passages that captivate in a way where the listener is taking on an emotional, out of body journey into horizons heard with acts like Candlemass, Solstice, While Heaven Wept, and the mighty Atlantean Kodex.

The magical range of Stephan conveys majestic power and glory – obviously seasoned in the ways of pushing every facet of his multi-octave delivery, as he can reach to the heavens while also delivering chill bump melodies in mid-range and lower registers. Check out “North Sea” for his versatility that matches the dynamic musical turbulence from serene to heavier passages throughout this 8:03 arrangement. Leonid picks his spots to deliver those epic riffs of doom that lift spirits in downtrodden times – occasionally injecting a bit of a progressive, driving nature or acoustic embellishment as the closing title track illustrates. Given a bit of a darker boost with guttural vocal support from guest Luc Francois of Mind Patrol, the slower dual guitar melodies and slower instrumental switch another jaw dropping moment that could cause unison tears to fall. The band also can execute a track like “Your Sun Will Never Shine for Me” in a tight, under five-minute window – the cultural, Irish-tinged musical components captivating against Stephan’s dramatic melodies during the verses. In fact, the only minor complaint to be had may be a rare one for this scribe – at 34 minutes and change, many will wish for another song or two to have this last just a bit longer.

Hailing from Germany where this style is revered, Servants to the Tide should hit a lot of newcomer of the year lists based on the grand delivery and honor contained within these tracks.