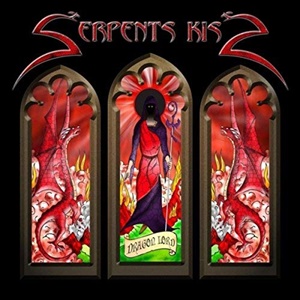 Active since 1995, Serpents Kiss from the UK may be sporadic with output (this their second full-length and first in 13 years), but it’s clear through Dragon Lord that they embrace a traditional, NWOBHM outlook. Understandable given guitarist/ keyboardist/ bassist Will Philpot’s history in the movement since the early 80’s with Omen (the UK act, not US) who only released a demo in 1981 during their three-year existence. The latest lineup includes Canadian singer Nikki Wozzo and drummer Mike Mallais, a world recorder holder for his double bass quickness – as this eight-song record encompasses a mixture of shorter anthems and epic arrangements that move into doom and power pastures beyond the normal expectations going in.

When listening to Will’s guitar technique and tone, it’s quite clear that Tony Iommi and his disciples rank high on his axe radar – check out his use of low bends, drawn out tasteful riffing, and flange effects during the 8:38 title cut, where Nikki emulates and equally measured melody movement with Ozzy-like warbles. Alert that dynamics matter even in the most basic of metal genres – the evil keyboards and pronounced swing/gallop for “Slaves of the Night” make this an ideal, crisp effort to rally around. When you encounter a title like “Sabbatha” – it’s apparent that Black Sabbath course through Serpent Kiss as a benchmark band to assimilate as, right down to the 70’s style Bill Ward grooves – but the guitar harmonies and layering gives the song that extra melodic spice to steer it away from pure hero worship. There are a couple of times where this scribe thought things were off kilter for the style the band is going for – a screech/grunge passage here, a prolonged, atmospheric intro on “Witches Embers” that would have been better left 45 seconds shorter to get into the meat of the song – but for the most part this is rock solid stuff with proper execution to fly the flag of metal high. Ending on another voyage note through the clean to heavy twists and turns plus multiple quieter to conventional vocals for “Winters Eve”, it’s evident that quality supersedes quicker output for the trio – which could be welcome for listeners tired of inconsistency in their favored genres/bands.

Ideal for those into all facets of Sabbath, 80’s period Judas Priest, and the NWOBHM ethics at hand – Dragon Lord checks off all the proverbial boxes in this style to win most over.