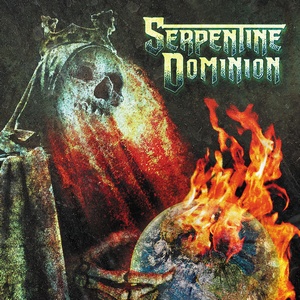 A high-profile project a long time in the making, the release of Serpentine Dominion’s debut comes with plenty of expectation. After all, a three piece consisting of Adam Dutkiewicz, George “Corpsegrinder” Fisher, and Shannon Lucas is hard to ignore. But Serpentine Dominion succeeds in the end, largely because they never trap themselves in the box that many people probably expected them to play inside of.

Indeed, the first released track, “The Vengeance in Me,” may have given some the impression that this release was going to be a death metal beast. Taking the blast-intensive beats of Lucas, the interlocking melodies of Dutkiewicz, and the intense growls of Fisher, it seemed a fertile ground for the amalgamation of Killswitch, The Black Dahlia Murder, and Cannibal Corpse. But let’s face it, an album just like that would have had its share of pitfalls. Instead Serpentine Dominion never really grasp too far at any musician’s roots, instead providing some sort of common ground between them. Notably heavier than KsE, but not nearly as brutal or frenetic as the other two afore-mentioned acts, this is a modern death metal album that may surprise some. The biggest surprise will be Adam D’s clean vocals making an appearance on a number of tracks. But the biggest shock here is how fantastic they sound against Corpsegrinder’s growls. Check out “Sovereign” or “Jagged Cross Legions” and you may be floored at the combination of sprinting death metal riffs combined with some glorious melodies and Dutkiewicz’s (underappreciated) cleans. There is one unfortunate negative, though it could certainly be much worse. Of course, that is the album length, which clocks in at under 27 minutes (and includes an intro and prelude). So it’s over before you know it, and at the level of the musicianship, you’ll be surely wanting more.

A supergroup that is deserving of its status, Serpentine Dominion also lives up to its lofty expectations. The fun of the recording process between these guys clearly carries over to the final product. Easy to win over any fan of the bands involved, but also to those wanting some melody to accompany their death metal (“melodic death metal” this is not). While it may be the only release of its kind, and feels a tad short, it’s nonetheless an impressive accomplishment that many in the extreme community will enjoy.