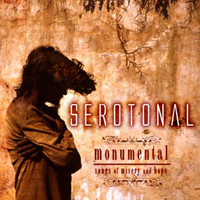 Well, here’s a name we haven’t seen in a while: Darren White. The quasi-legendary first singer of Anathema has kept a low-profile since the demise of his post-Anathema The Blood Divine roughly a decade ago, prompting some to pine for the man’s organic, damn-right-I’m-miserable vocals.Monumental: Songs of Misery and Hope is Serotonal’s first effort, and while it doesn’t pick up the slack of Serenades-era Anathema (as predictable as that would be), it spews forth a harder, more hardcore edge, which mixes effortlessly with the natural gloom and melancholy White is known for. And thankfully, the Brit is still one miserable SOB.

White’s vocals (read: grunting in key) have aged quite well. It’s not like the man ever had to use an expansive range or anything, but he’s awfully effective when given threadbare, but doomy material in which to work with. Case in point, the dreamy “Wasteland,” a song that bristles with magical

doom melodies, augmented by White’s highly-emotive vocals. As mentioned before, there is a distinct straight-metal edge to this thing, of which comes to the forefront on opener “Self-Control Seizure” and “Now It’s Over.” This balance is what ultimately could pull Serotonal away from the doom crowd, something that could work in the band’s favor given how restricting that particular scene is. Additional jams of note include the disturbing “Unseen,” winding and rolling “Monumental” and thrash-tinged (love the intro) “Hinge ( ).”

Let us commend White for not going the safe route and trying to recreate Serenades or Pentacost III. There’s really no value in such an endeavor, as much as people would lose their marbles over it. A very welcome return and highly recommended offering, Monumental: Songs of Misery and Hope is – *gasp* – a forward-thinking approach to doom metal, coming from someone with a handful of some of the greatest doom songs under his belt. Those of course, would be “Sleepless” and “Sleep in Sanity.” Monumental as well.