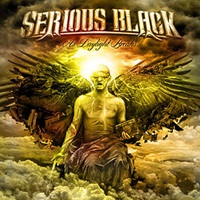 When half of your lineup consists of former or current members of Helloween, Blind Guardian, Tad Morose, and Masterplan, you certainly start leagues ahead of any newcomer in the melodic/power metal field. A résumé gets your foot in the door, but in today’s whirlwind release schedule, if you can’t deliver quality out of the gate, people will move on faster than the latest social media app fighting for consumer attention. So the debut album from the multi-continental act Serious Black has a lot of hope riding from the onset – and fortunately for the consumers, will be delectable for a wide majority who take in copious amounts of Euro-centric metal.

Allowing multiple members to contribute song ideas proves fruitful in terms of the wider swath of coverage and textures Serious Black display. The Urban Breed-led opener “I Seek No Other Life” (originally slated for a solo venture) puts the man’s soaring, high octane voice seamlessly next to an equally energetic main riff as Thomen Stauch pumps out all his fill and double bass kick tricks. Follow up “High and Low” features an addictive Jan Vacik keyboard hook, something similar in musical context to Roland’s early work in Masterplan, while the title track features a lot of those cinematic/symphonic flourishes the best power metal acts incorporate for added dramatic tension.

For many who love this genre, it’s all about the up tempo percussion and jackhammer riff stacks that make for unison chanting and crowd elation – look no further than “Setting Fire to the Earth” or the Blind Guardian-esque guitar tricks within “My Mystic Mind” to hear early contenders for song of the year in this genre. And when you possess one of the best singers for melodic, power, or progressive metal in Urban Breed, his emotional grit and wide birth in terms of multi-octave seasoning takes “Trail of Murder” and the alluring “Listen to the Storm” to that upper tier level to separate say Kamelot from Skylark.

The only disappointment comes from the fact that As Daylight Breaks flies by in a tidy 41 minutes, so the sextet has adequately delivered a top-notch front to back recording; one that should have plenty of life as they bring these songs to the road. Serious Black can be torch bearers for melodic power metal hopefully for years and years to come.