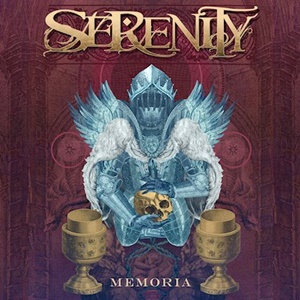 Capturing a special performance of material in a conceptual show reinterpreted, Memoria is a live BluRay, DVD, and double CD release from the veteran Austrian symphonic power/progressive metal act Serenity. Beyond the four main musicians, the additional guest musical performances enhance the overall atmosphere and experience these audience members treasured – the 17 tracks traverse the full discography, stripped down yet no less engaging or exhilarating in the dynamic versatility present. There’s a narrative aspect which ties together the flow of the set list – providing oral enhancement beyond the natural live interaction and visual aspects at play.

The acoustic treatment encourages plenty of handclapping throughout – the audience engagement fuels the depth of emotion transmitted in these songs, “Set the World on Fire” an early favorite, drummer Andreas Schipflinger shifting between his steady grooves with occasional progressive flair for transitional moments, while the mandolin handiwork of Christian Hermsdörfer magical. The magnificence of vocalist Marco Pastorino appears in a duet with Georg Neuhauser and the band for the Fallen Sanctuary track “Broken Dreams”, while former singer Clémentine Delauney tackles two songs from her time with the group, “Fairytales” and “Legacy of Tudors”. Plus, who wouldn’t want great acoustic guitar guest work on “Velatum” and “Souls and Sins” from Avantasia’s Sascha Paeth to bring vibrancy to these moving tracks? Historical tales and mythology content has been a staple in the Serenity songwriting – especially given Georg’s professor credentials teaching this subject matter. The intimate setting seems to send electricity from band to fans in a circular motion – the requisite chants between songs almost emulating what one would expect at a sporting event.

Given the fact that the band had to postpone this performance until pandemic restrictions were lifted, Memoria is a fine, stripped down ideal of the songwriting excellence and wide array of emotions conveyed in Serenity’s seasoned material.