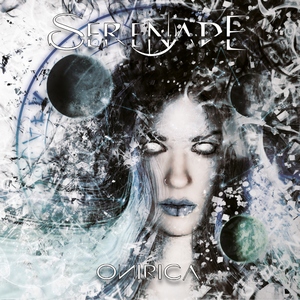 Amid the sea of female-fronted heavy metal acts, there’s a vast majority that spend too much time with the vocal aspect and forget that the music behind it is just as important as a solid voice out front. Italian act Serenade avoid said curse with their second album, Onirica, their first release in five years. While Claudia Duronio leaves a definitive mark, the varied musical approach behind her stands up just as strong.

While Onirica will come off as somewhat familiar in tone, there’s also plenty of variation involved to keep you listening. They take symphonic elements, gothic tones, heavy metal riffing, and blur it all together to give it a fresh spin. “When Darkness Will Fall” begins things after a short intro (“Insomnia”), with plenty of energy and emotion. The guitars come in heavy, with an ominous edge that counters Duronio’s vocals wonderfully. It’s always a positive to find a band in this style that you can still headbang along with. “Oceanus” and “Sleeping Dream” offer this same level of punch just when the album needs it later on. Other tracks come in with more melody, and sometimes with a more modern feel, like “Hold Me Back,” without bringing down the intensity. On the lighter side of things is “Stormborn,” a touching piano/string ballad that feels genuine and sullen – a good show of Duronio’s vocal prowess as well. But the album’s highlight would be that of the 8-minute plus “Luceafarul,” which begins in a fairytale-esque way and quickly escalates into heavier territory and a duet between Duronio and Fabio Dessi (Arthemis) – who also appears on “Kill Your Pain.”

Energetic and punchy, Onirica flirts with familiarity but spices things up into heavier territory. A swath of different components come together to give them a full album-worth of tracks that will have you hooked after a listen, but don’t dull with age. Serenade can bring some darkness, but it’s not without catchy melodies.