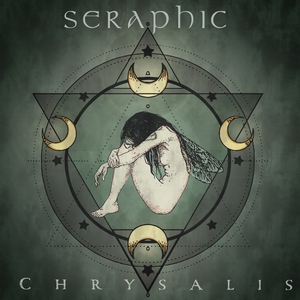 Australian symphonic metal act Seraphic return with their second full-length with Chrysalis. Piggybacking off of their 2017 debut, Journey to Illumination, the title is suggestive that the band is in the midst of an evolution of sorts. While the band hasn’t quite emerged from their symphonic metal cocoon, there is potential to be found here.

The strongest point of Seraphic is that they manage to write in some really powerful moments. The choruses almost always land beautifully, and the band provides an ethereal quality to the music but with enough metallic weight to back it up. “The Phoenix” is the strongest example, with some driving riffs and keys playing off each other in the verse and it builds into a fantastic chorus that does an excellent job of soaring away into the stratosphere. Toss in enough heaviness and some occasional growls and it’s a real winner. Unfortunately, it’s also the only track that really works at 110% from beginning to end. Seraphic ultimately bogs themselves a bit in the ‘more is more’ philosophy. The tracks outside of “The Phoenix” and mood-setting intro “Behind the Veil” all sit between 6-8 minutes for the most part and they could use a good trimming. “Garden of Unearthly Delights” has some standout triumphant moments, particularly in its riffing, but a bit of tempo slowdown in the second half ends up taking some of the oomph out of an otherwise great track. “The Monster Within” is a more reserved and slower track, but here the riffs don’t catch enough firepower (other than an excellent solo) to keep the listener engaged, not really catching its stride until around the last minute or so. “Transformed” also suffers a bit in this same regard. There’s an elegant piano looming in the background, but the rest of the instrumentation seems to sit behind it and play second fiddle – resulting in a bland feel instead of an intimate one.

There’s a lot of little nitpicky details that end up weighing down Chrysalis. With some proper trimming and some attention to making the riffs stand out more, Seraphic could be onto something. It’s tough with an album like this, because some moments are really good, but in the end, it feels like the outcome is less than the sum of its parts.