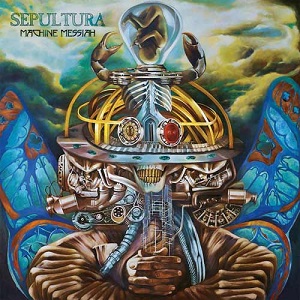 Since 2009’s underappreciated A-Lex, Sepultura has been good when they need to be great. Being great would be the only way for them to combat Max Cavalera’s media presence, which remains as unyielding as ever. But the Seps have yet to come up with anything that equals the Cavalera era, even if the occasional burst of intensity of yore has translated on the aforementioned A-Lex and 2013’s wordy The Mediator Between Head and Hands Must Be the Heart. With reunion talks still at a standstill, Sepultura has hooked up with in-demand Swedish producer for Jens Borgen for Machine Messiah, the eighth (!) studio album with Cavalera replacement Derrick Green out front.

We’ll start with Green, whose vocals has always had a more urban flavor in comparison to Cavalera’s jungle roar. On the quick “I Am the Enemy” and snappy “Phantom Self,” Green can be found heaving authoritative chorus choices, particularly on “Phantom Self” which touches on how digitized society has become. “Cyber God” has Green employing a sung-spoken word section along with actual sung vocals, further bolstered by Andreas Kisser’s expansive guitar work. And that’s really where the advantage with Sepultura lies: Kisser’s guitar playing, which is busy, native (“Iceberg Dances” in particular) and jarring, hovering above and beyond the band’s once immovable power chord fray.

However, Machine Messiah still doesn’t quite put Sepultura over the ledge. There’s a bit of song clog in the middle of the album’s running order, making things a hair top-heavy. Indeed the punishing title track, “I Am the Enemy” and “Phantom Self” are the type of smoldering, edgy jaunts that can quickly make a believer out of anyone. A full album of such songs would work wonders in validating the Green incarnation of Sepultura once and for all.