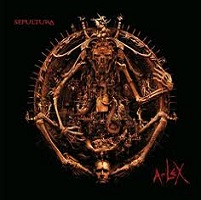 With little or no staying power to the Derrick Green era, Sepultura finds itself with a perpetual uphill battle, made all the more daunting now the band is totally Cavalera-less. Sure, new drummer Jean Dollabella is a skilled sticksman, even dominating numbers like “Strike” and “What I Do!,” but the pizzazz that Igor Cavalera brought to the drums isn’t there. Obviously, the same can be said for Green still trying to replace Max Cavalera – it’s not the same, no matter how good of a vocalist he is. In the end, that is stigma attached to Green-era Sepultura.

Nevertheless, A-Lex is a lot better than initial reports, with some chunky riffage highlighting “Filthy Rot” and “Conform.” The storyline around Stanley Kubrick’s classic A Clockwork Orange is an area rarely touched upon in metal, so kudos to the Seps for going after this.

in 15 years, rattling off classic solos on “Moloko Mesto” and “We’ve Lost You.” As for Green, his vocals are no longer an acquired taste, having now fully grown into his role as frontman on 2006’s better-than-good Dante XXI. The man displays some nice versatility between his patented growls on “The Treatment” and “Conform,” two standout numbers.

We could sit here and argue the merits of a Cavalera-less Sepultura (methinks the name should have been changed once the drum throne was vacated by Igor), but the band is fully committed to Green and life without Max. This only makes things more difficult for the band to release new material, as regardless of the quality, the Cavalera connection is forever going to be there. It’s like when Maiden dropped Bruce for Blaze or Ripper filled in for Halford – the two parties are forever linked. Shame, ‘cause it really overshadows the fact that A-Lex is a pretty good album.