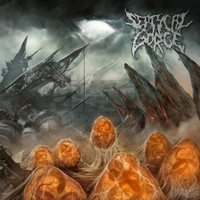 Adding to the Italian stranglehold on brutal death metal, Septycal Gorge may not immediately feel as similar to their countrymen (ie: Hideous Divinity, Bloodtruth, Hour of Penance) as there is a definitive ‘90s US influence, but they are just as technically savvy. Their third full-length effort, Scourge of the Formless Breed, should find plenty a happy home with those seeking the most extreme material available.

Occupying the same niche as bands like Suffocation, Beheaded, and Disavowed, Septycal Gorge implements brutally technical material with absolute savagery. There’s that crispness in the production that gives the guitars a menacing tone (and yes, a bit similar to Suffocation) that works well for the band. The riffs will make you want to lash out at the nearest object, yet there is something memorable about them. Despite the technical blitzkrieg, many of the songs will keep coming back to you, which is always an added bonus with this type of material. “Breed of the Rejected” and “Awakening of the Seven Serpent” are particularly enjoyable, with their blend of fast and technical riffs to complement some slower, mid-paced moments and groove. The vocals hit the high water marks as well, benefiting from some more intelligible low growls that don’t lose any of their impact from it.

While it might benefit from a little bit less Suffocation and just a tad more variety, Scourge of the Formless Breed will put a technically proficient death metal smile on your face. A strong look back at some slightly older brutal death metal with groove that will hit you hard, Septycal Gorge provide another reason as to why Italy might just be the current death metal hot bed.