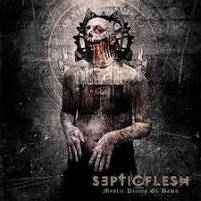 “Cult” or “kvlt” (for you nitpickers) is all over Mystic Places of Dawn, the first release from Greek champs Septicflesh. Originally released in 1994 on Holy Records (also the former home to Orphaned Land), Mystic Places of Dawn helped set the course for the band’s humble blackened beginnings, which accordingly, are a few classical and keyboard cranks from being considered true black metal. Yet, the flair and suffocating atmosphere is all here, reissued so the masses can see where it all began.

Aesthetically, Septicflesh back in those days didn’t differ much from countrymen Rotting Christ. Both bands preferred melting harmonies, vocals that were a bit off the BM beaten path, and padded their songs with multiple keyboard tracks. Whereas Rotting Christ often went too full-bore in the tempo department, Septicflesh found their stride in the 4/4 plod and crawl heard on “Pale Beauty and the Past,” along with “Crescent Moon.” Not to insinuate it’s all a tempered pace (it’s not), but this is where the onslaught of darkness started to seep in. Unconventional, yes, but wholly engaging, like on the gorgeous harmony portions of “Chasing the Chimera” or the forlorn “The Underwater Garden.”

With their nascent Temple of the Lost Race EP tacked on as a bonus, it’s clear that quality once again takes precedence with Septicflesh. It’s really no different than how they’ve proceeded since their 2007 reformation; the band has established themselves as a reliable Greek force, with a back catalog that deserves full examination, along with a current output that is just as daunting.