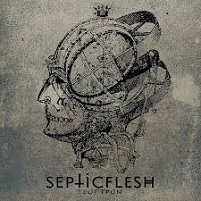 The real find in the Septicflesh reissue series, 1995’s Esoptron was the album that took the Greeks out of the black metal underground and placed them into their own exclusive space. Enchanting, haunting, and melodious, Esoptron’s sonic stamp might have been a sign of the times (cue drum machine and murky production values), but the glow of the album’s 11 original cuts (three are tacked on for the reissue) is simply blinding.

Unlike its Mystic Places of Dawn predecessor, Esoptron fully sheds any like-minded Rotting Christ ideas. The tempo is slowed to a vicious lurch, allowing the serpentine melodies and mesmeric background vocals to find their place. In supply are calculated numbers such as “Burning Phoenix,” a number rife with crisp melodies and symphonic tactics. In the rare moments the band wants the break out the extremity wand (see: the title track and the fantastic “Rain”), Septicflesh was smart enough to find the open space to lay in billows of atmosphere. It’s this regular collision of words that pulls together “Ice Castle,” which serves as the band’s memorable number in their early portions, complete with eerie guitar chimes and the forcible black bellow of Seth Antoniou.

Original versions of Esoptron have proven to be elusive, probably because they were released by the long-defunct Holy Records. Therefore, a big pat on the back goes to Season of Mist for bringing Septicflesh’s back catalog into the modern age. Esoptron will prove to be the best of the bunch; an album that prides itself on individuality and challenging the darkest depth’s of one’s soul.