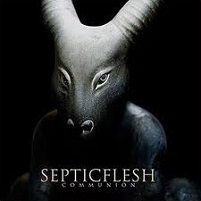 The holy godfathers of the Greek metal scene (Rotting Christ is a very close second), Sepeticflesh return after a short breakup with Communion. As far as natural dark metal bands

go, few are more invigorating or adventurous as Septicflesh; their career marked by gradual development and change during the late 90’s. No further proof is needed than the seminal Ophidian Wheel and A Fallen Temple albums, two bodies of work that are indelibly unique and helped create the symphonic black metal template we know today.

Communion is a marvelous comeback, with the band capitalizing on the pile-driving sound it purveyed on its last studio album, 2003’s Sumerian Deamons. Credit the Studio Fredman (Dimmu Borgir, In Flames, et al) production job for this – Communion has a sonic ‘oomph’ that resonates across the board. Throw in the quirk that the band’s amalgam of black metal and thick, chunky melodic death metal has been given a boost by the inclusion of a real orchestra courtesy of the Philharmonic of Prague and what you have is something to behold.

The orchestral movements here are monumental – “Persepolis” being the obvious benefactor of this addition. “Sangreal” reigns in as the true album highlight, with Seth Siro Anton’s harmonious and unique clean vocals colliding with a stream of classic Septicflesh melodies. “Narcissus” follows suit and leans towards some of the band’s earlier work, especially in those dastardly leads and twin guitar

Perhaps the real trick to Communion’s power and glory is its versatility and penchant for the dramatic, which is obvious on lead single “Anubis.” Here, the band takes a driving, murky main riff and transitions into a flowing, booming chorus that seemingly is trying to fend off the orchestra.

Already getting rave reviews from the Euro press, Blistering will follow suit and dub this an instant entry into discussion of 2008’s best albums. Fact of the matter is, Communion is in a league all its own – the perfect and righteous combination of the symphonic black metal and dark metal worlds, wrapped up beautifully in an exotic Greek metal package. Credit not only the band’s intuition, but their locale as well – there is some seriously heavy and moving stuff coming from this album.