Septagon – We Only Die Once (Massacre Records) 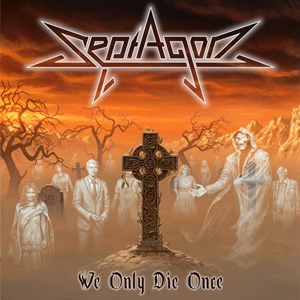 Featuring members of acts like Atlantean Kodex and Them, Septagon are a five-piece outfit from Germany that journey into the speed/thrash terrain with their material. Previously a part of the Cruz del Sur Music roster for two albums, We Only Die Once sees the quintet moving to Massacre Records with a new drummer in tow (welcome ex-Paradox kit man Daniel Buld). An evolution from 2018’s Apocalyptic Rhymes where the band employed a total songwriting approach, those who enjoy a sophisticated blend of semi-technical riffs, crunchy rhythms, and spirited/dynamic rhythm section work along with some melodic soaring vocals will find much to praise in these ten tracks.

The guitar interplay and focus of Markus Ullrich and Stef Binnig-Gollub can’t be denied – stacking up thick riffs that are crunchy while adding in additional harmony and melodic runs that twist and turn up the fretboards. Beyond the big four of thrash for influences and into the horizons of Toxik, Flotsam & Jetsam, and Artillery as “The Rant” and “Head Held High” illustrate, the adherence to tight musical components against the melodic hooks and earworms keeps interest on a high level for initial (and subsequent) playbacks. The slower, calm clean guitar/bass early measures for “How to Kill the Boogeyman” give off a bit of a Megadeth/Annihilator vibe, although vocalist Markus Becker possesses a chilling, metal to the bone delivery that takes Septagon to another level (a la Joey Belladonna or David R. White of Heathen) as the progressive/speed arrangement unfolds. Daniel’s expertise when it comes to groove against his supreme fill and double kick abilities comes to the fore on “Gardens of Madness” – the longest track at 6:46 which features some killer arpeggio-laced lead runs, twin harmonies, and classical accents. And you have to love “Ekke Nekkepenn” – a legendary North German figure who plays tricks on seafarers and residents of the North Frisian Islands, a tale ending the record in glorious thrash debauchery.

We Only Die Once is a record for those who want a little more progressive speed and melodic/harmonic push than normal from the normal thrash outfits of today’s scene. Septagon continues to appease that segment of the metal movement that strives for solid musicianship in a tight, focused record – and hopefully will climb up the ranks for sales, tours, and festival gatherings.