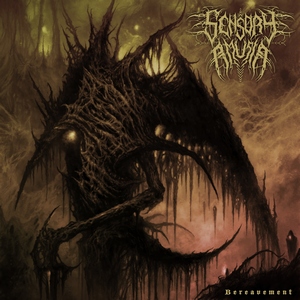 One of those releases that initially caught the eye with its dark, towering, and somewhat gloomy artwork, Sensory Amusia is a fairly recent act that nestles into the modern death metal arena. After a six year stint between their first effort (2013’s Disrepair) and last year’s In Extremis EP, they have quickly jumped back into the fray with another EP with Bereavement. Despite the morose title and adorning artwork, this one is going to knock you back.

Somewhere in between the worlds of modern death metal and grind lies Sensory Amusia. The five tracks, including one rather furious “Intro,” waste no time getting down to business. Of course, that business is frantically bashing skulls with their visceral take on the genre. “Death” leaps out of the starting line with grinding speed and tornado riffs cycloning around and they offer no relent in their efforts. While the tempo does ease off the gas for some groovier moments, they keep the intensity high at all times. Grooves are aggressive and quite catchy for what they are, giving you a second to absorb them before they return to battering you with chaos. “Beast” sees some more technical touches infused as they slow the tempos a tad, but really dig into the monstrous grooves. The balance of thick, pounding grooves and grind-y speed runs is the band’s forte and the way that it’s all put together makes it rather thrilling, but at the same time, you can go back to it and find some solid melodies (see “Absolute”), and the diversity in extreme vocal styles is an added bonus to the entire package.

The type of blistering affair that will appeal to fans of Benighted or Aborted in particular, Sensory Amusia fire off a furious cocktail of death and grind with Bereavement. You can get your adrenaline thrills at the onset, but you’ll be welcomed back by a deeper intricacies as you return to it frequently.