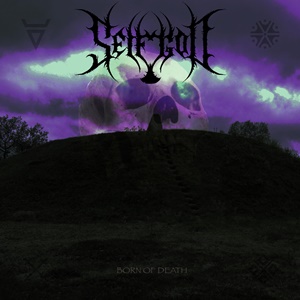 Every band has a story. All of them are unique, of course. Selfgod guitarist/band leader Serge Streltsov has one that is profound. Born in Ukraine, and immigrating to the United States as a teenager, Serge has witnessed the horrors of war, and has persevered with a deep connection to his culture and his people. Residing now in Pittsburgh, Serge has begun to make a name for himself in the metal world. From his stint in Necrophagia (RIP Killjoy), to his breakout and acclaimed black metal outfit Automb, we now come to his new project Selfgod – the debut Born of Death being our main focus here.

If familiar with Automb, Selfgod will bear some familiarity. Present is the precise and hard-hitting riffs that have become Streltsov’s signature, but with less black metal, but more death metal in approach. One may say it’s a perfect union of Necrophagia’s horror-based death metal attack with Automb’s cold black metal aesthetic. The result is the most varied release that Streltsov has created yet, and one that fans of death and black metal alike should find something to dig into.

Kicking things off is “Fire Czar”, with a lead guitar intro that builds into a mid-paced riff extravaganza, with multiple tempo changes that display variety. “God of Self” is a heavy chunk of equal parts slow and grimy, with galloping riffs that stick in the ear. “Morena” ups the tempo a bit yet stays heavy as can be – fitting for a track about a Slavic Goddess of death. Slavic Paganism is a concurrent theme, with that part of Streltsov’s roots being an important aspect of both the artist and his music. “Veles” is a personal favorite, with the opening riff being quite the earworm, with some tinges of black metal ala early Behemoth being an apt comparison. Title track “Born of Death” – a play on words about reincarnation – closes the album with gusto, being one of the fastest songs on offer, and is sure to get your head nodding in approval.

Produced by Scott Elliot of Chernobyl Studios (who unfortunately had to relocate from Ukraine due to the war), the sound is menacing, poignant and in your face. The mix allows all elements to shine – from the crushing rhythms to the massive drums (provided by Scott Fuller of Morbid Angel fame). Streltsov provides the rest (guitars/bass/vocals), and all together equate to a big sound that delivers in all the right places.

If you’re a fan of death metal, black metal, or just really heavy music, give Selfgod a listen. They should be landing on a lot of radars soon, so get in early and enjoy. Born of Death is a fine debut. Steltsov is also donating proceeds from the album to help Ukrainian refugees, which is commendable and a beyond worthy cause that everyone should support. Good music, helping a humanitarian cause. Hard to top that!