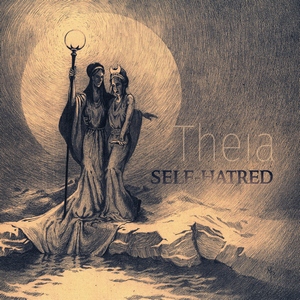 Solitude Productions strikes again with a new bringer of doom and gloom from the Czech Republic. Theia is the band’s first release, and carries with it plenty of depressive emotions sure to bring any that listen into a darkened place, but one that isn’t entirely devoid of hope. In essence, exactly the type of material you’d like from a doom band.

As mentioned, Theia isn’t an album you put on to hear a bunch of hook-driven melodies and snappy choruses. The focus of Self-Hatred seems to be more about atmosphere than anything else. In some ways, it’s almost more of a numbing emotion than a melody-seeking one. Not that melodies don’t persist (see “Self-Reflection”), but the gloomy riffs tend to linger around the mid-tempo range or below – on a few occasions picking up tempo but not really turning up the intensity so to speak. While this does lead to some “blurring,” the band wisely chose to avoid the usual 12-15 minute “epic” lengths that some funeral doom acts tend to take (the band’s sound a la “Memories” actually seems like funeral doom at a slightly faster tempo) and this is kept to a minimum. The keys sometimes work to give the guitar (and melodies) some extra punch, but also work well to provide an almost horror-ridden atmosphere at times – not unlike some gothic-influenced material. On another positive note, the vocals are pleasantly diverse, with low growls and higher snarls making up the majority of the album, with some spoken word and backing choirs sometimes adding some more flavor.

A fine debut with Self-Hatred’s Theia. A few more tempo changes couldn’t hurt the overall dynamic, but the more atmospheric doomy approach is one that could easily take the band further in time. It doesn’t feel too much like their influences, but only a vibe of familiarity, which should be a key towards future success.