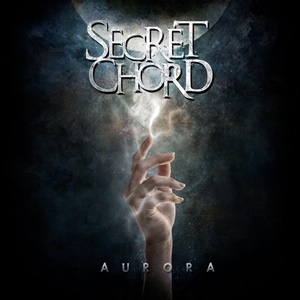 Probably not surprising that the Portugal metal scene is quite broad and diverse thanks to the long-running success of Moonspell. Secret Chord as a newer act hail from Poiares, starting in 2015 and releasing their Dimensions of a Dream debut EP in 2018. Finally solidifying their lineup with latest bassist Nuno Fidalgo, the quintet sign with Sleaszy Rider Records to release a debut full-length for Aurora – a nine-song outing that takes a main symphonic metal stance and branches out into alternative, melodic, and occasional extreme angles.

Often the musical interplay from the rhythm section to guitars along with additional keyboard/orchestration support created a symbiotic groove/propulsion element that easily engages the listener to the main hooks. “Lack of Contact” and “Egocentric Lust” are two standouts in that regard, the latter containing strong, driving harmonies and exhilarating lead work during the verses from guitarists Carlos Pereira and João Conceicão. Dual male growls from Carlos with the expressive and bright clean vocals from Raquel Subtil provide that beast/beauty dynamic that makes “Never Again” dramatic and alluring, the aggressive elements perfect against the serene transitions that contain softer, lower narrative action to build atmosphere for the next movement. Secret Chord sit on more of the commercial side of hooks and main songwriting compared to say the Epica’s of the world. Raquel possesses more of a classic hard rock voice that contains more American than European qualities – think Sarah Teets of MindMaze versus say the Floor Jansen-style voices of the world. Her work in tracks like “Sickness” and the semi-progressive, heavier “Empowerment” sure to garner solid attention, properly holding a variety of upper register notes in a riveting manner. Pulling out all the proverbial supplementary bells and whistles (piano/drum embellishment instrumental intro, classical-oriented accents, a calmer conclusion) on the seven-minute plus “Demon Angels” closer, there’s plenty to really enjoy about Secret Chord as far as their songwriting, execution, and attitude towards the genre even this early into their career.

Put Aurora on your radar if you like music that has the right balance of melody and harmony in the symphonic metal genre, plus spirited action that can prove these musicians have professional skills at their craft.