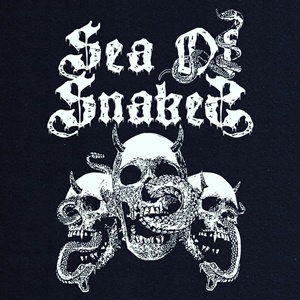 The mesmerizing versatility of California bands assures plenty of music choices for the listeners. Always up for hearing fresh talent, World of Fire is a five-song debut EP from Sea of Snakes – taking a mixture of sounds that groove, shake and dazzle from a southern-fried angle that is always catchy. All one can ask for in a product is passion, consistency, and the ability to convey their ideas into constructs the listener can process and relate to.

Between the thick, hammering riff combinations that shake the rafters from guitarist Jim McCloskey and the supplementary pocket dynamics that can be doom-oriented one measure or solid metal the next out of bassist Mick Coffman and drummer Jeff Murray, it’s hard not to succumb to the hooks on first pass for “Let the Fire Burn” and “Son of Man”. The slithering, low-tuned nature to “Drink Your Teeth” takes aspects of Crowbar leveling to another degree, twisted into Danzig and Alice in Chains for good measure. A separation maker to putting Sea of Snakes in bigger league ranks could be the diverse sneering antics of singer Tracy Steiger – he has an edge and potent, razor sharp twang that has everything from Jim Morrison to Pepper Keenan from Corrosion of Conformity at heart, most noticeable on the perfect highway cruising anthem “Ride the Line”. The solos possess bluesy wah-wah charm, and when the band want to stretch their chops into a bit more calm, serene terrain, you get closer “Fear Behind the Stare” where the thoughtful clean opening leads into some fuzzed-out Sabbath-esque licks as Tracy plots his words in raspy despair.

An ideal EP gives the listener a solid selection of material that captures as many sides to a band as possible, as well as leaving the proceedings wanting more. Sea of Snakes succeeds on all fronts for World of Fire – assuring appeased bar patrons once things get back to normal and these gentlemen can crank these tracks on live stages locally (and hopefully) beyond.